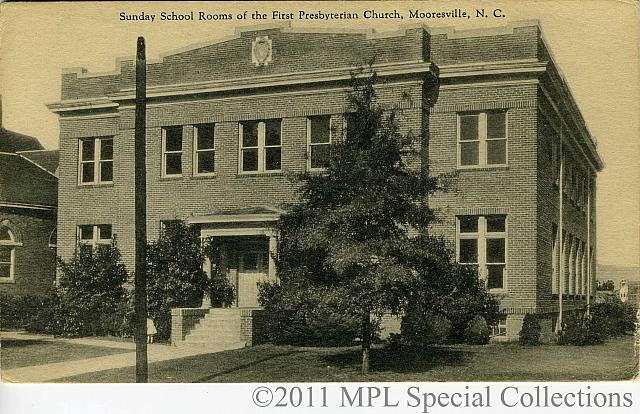 Built in 1899 and later expanded, the First Presbyterian Church stands on the second site of the church. The first church was built on the corner of McClelland Avenue and Church Street which is the current home of the First Baptist Church. The building was originally a one-room wooden building constructed around 1875 for the newly organized church, the first organized church in the newly incorporated town of Mooresville. Members of Prospect Presbyterian Church formed the core membership of the church, as many of Mooresville’s first residents were members of Prospect Presbyterian Church. One of the early founding members of the First Presbyterian Church was John Franklin Moore, namesake of the town of Mooresville. The church moved to its’ current site in 1899 when it built the first part of the current building. The first building consisted of the two towers, the parlor, which is the semi-circle and the large-square building. Parking of the horses and carriages was in the back of the church where a long hitching post ran. The first house used by the church for the minister is still located on Board Street and down from the intersection of Board Street and McClelland Avenue. In 1925, the church expanded to the current building present today. The large square building to the right of the church is the second educational building which was built in the 1960’s and expanded in 1989. The first educational building was built in 1923. This building housed the Sunday School rooms and the fellowship hall. The second educational building was built to meet the demands of the growing congregation. The building housed the larger fellowship hall as well as additional Sunday School rooms and office space. In 1925, the sanctuary was expanded, making the church the largest building in the town. The church could seat 500 people. The current manse or house for the minister was built in 1924 and is still used as the home for the current minister. The slate (Buckingham slate roof for the church was brought in on five box cars. With more than enough slate for the church, the remainder of the slate was used to cover the roofs of several houses in town of persons who were members of the church and who helped in providing the extra money for the slate. The granite that was used along the windows and stairs was brought in from Granite Quarry, North Carolina. The stain glass windows are original, but as for who created them or when they were made is unknown. The style of the building is American gothic, though it is originally thought that another parlor building was to be built, but due to reasons that are unknown, the building was never built. The architect who built the church also built and designed the second building for Central United Methodist Church, which is located on Academy Street, South of the First Presbyterian Church.